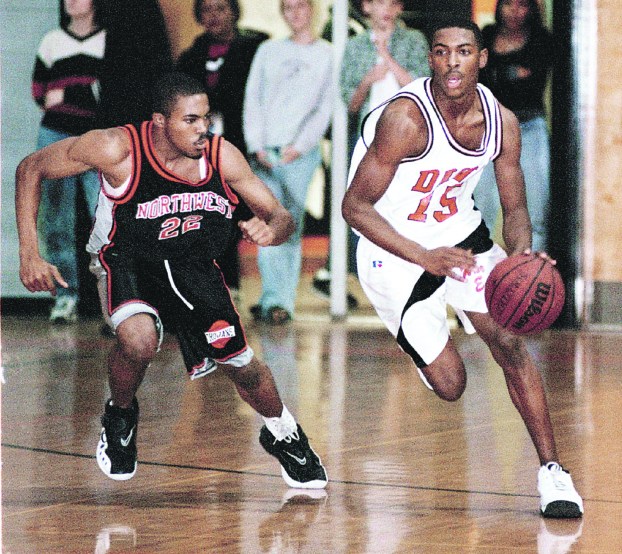 First in a three-part series on new Davie hall of famer Duane Phillips.

Dwayne Grant is quite simply the best player in Davie boys basketball history. Period. He averaged 15.6 points, 12 rebounds, converted 61 percent of his field goals and made All-Northwest … as a freshman.

So you start with Grant and then draw a line.

The No. 2 player in program history could very well be Duane Phillips, a Davie High Athletic Hall of Famer Class of 2021. He’s the No. 2 career scorer with 1,544 points. After being a role player his first varsity season as a 1997-98 sophomore, Phillips was basically unstoppable as a junior/senior, scoring 1,310 of his 1,544 points his final two years. The 6-1, 165-pound scoring machine averaged 26.5 points as a junior and 24.9 as a senior.

Phillips could score inside and out. He drained 118 3-pointers as a junior/senior, but his ability to beat you off the dribble, knife through the lane or pull up from 20 feet made it almost unfair for defenders.

Phillips, 38, has to be among the world’s nicest guys. His first thought when he learned of his selection?

“The first thing I thought about were memories being in Davie County, from middle school to high school hanging with my friends,” he said from his home in Killeen, Tx. “I enjoyed being a kid and playing ball. That’s all I wanted to do and it paid off. It’s a blessing to be in the Davie HOF.”

One of the first people he told was his young daughter.

“I think I told my daughter (first) because I was actually home in North Carolina at the time visiting her for her birthday; she just turned 7,” he said. “I explained what that meant, but she was just like: ‘OK.’ She has all my trophies and plaques in her secret hiding spot – my grandmother’s closet. Marcus Lassiter, my best friend, and some other people knew before I did. I thought that was crazy.”

Phillips lives at the Fort Hood base, one of the largest military installations in the world.

“My uncle retired with the Army and talked me into moving here to Texas,” he said. “Better living here.”

A one-sport athlete, basketball meant everything to Phillips. And boy, did he make it fun. He was relentlessly upbeat on the court. He oozed swagger. On and off the court, he always flashed a megawatt smile.

“This guy stayed with a ball in his hand,” Vincent Cockerham wrote on Facebook. “I knew when he started playing with the men at about the age of 14, he was determined and headed for greatness.”

“Every time I think of you, I smile,” Julie McDaniel Snow wrote on Facebook.

Phillips grew up in Cooleemee and attended South Davie Middle. He started his freshman year at North Rowan High, but he transferred to Davie right before the 1996-97 basketball season. He spent his freshman year on the junior varsity.

Although Phillips was the No. 4 scorer for the 1997-98 War Eagles as a sophomore, he filled an essential role as the point guard. He was exceedingly unselfish as teammates commanded the spotlight. There was one game in which shooter Mike Whelan nailed a then-record eight 3-pointers.

Phillips began to emerge as a consistent contributor in a 61-54 loss to South Rowan in the Christmas tournament. He had nine points and four assists.

The War Eagles suffered four straight losses in early January. They were 0-3 in the CPC and desperate for traction. The next opponent was Mt. Tabor, which was ranked No. 1 in the Northwest Coaches Poll. A win over Tabor was certainly not on anybody’s script, but the War Eagles pulled the upset, 69-66. That was a huge step in Young’s rebuilding process.

Then came perhaps Phillips’ coming out party. It was a 70-38 home drubbing over South Rowan, the same South that defeated Davie at Catawba in December. While Derek Faulkner scored a game-high 17 points, Phillips sank 6 of 7 field goals and scored a season-high 16 points to go with six assists.

But Faulkner was unquestionably the go-to man that season. On Senior Night against South Stokes, the 6-2 inside/outside beast poured in 35 points as Davie rolled 90-74. Phillips contributed seven points and 10 assists.

The final regular-season game was at Tabor. The Spartans were 18-6, but they were ready after getting stunned by Davie in Mocksville. The War Eagles were looking to prove the first meeting was no fluke, but they faced a 57-45 deficit with 5:45 to play. They rallied on sheer guts, putting together a 20-7 run in a span of three minutes, 30 seconds. They took a 65-64 lead when Jesse Marion stole an inbounds pass and flipped the ball to Phillips, who made an eight-footer.

Tabor scored the next five points to take a 69-65 lead, but Phillips’ putback and Faulkner’s finger roll tied the score at 69 at the end of regulation.

The game was still tied at the end of one overtime. Davie ran out of gas in the second OT. Four starters (Whelan, Faulkner, Ray Spain and Jason Neese) fouled out as Tabor wound up attempting 56 free throws to Davie’s 24. Tabor pulled away 97-87 to clinch second place in the CPC. Davie (4-6 CPC) could have jumped to third with a win, but instead fell into a fourth-place tie with S. Stokes.

The epic double-OT game saw Jason Neese score a career-high 28 points and pull down 12 rebounds. Faulkner put up 21 points and six boards. Phillips scored a new season high (17) and handed out four assists. Kenny Collins, who started the year on JV, came through with eight points and 10 assists.

The first round of the CPC Tournament was a big game. The Davie-S. Stokes matchup was to decide the fourth and final playoff berth. Davie won 68-59.

Now Davie had a chance to shock the state in the semifinals, which were held at West Forsyth. Reynolds was the top-ranked team in the Northwest Coaches Poll, but the War Eagles came out like a Rottweiler, opening up leads of 8-0 and 16-4. When they held a 36-29 lead with 2:39 left in the first half, Faulkner was having a monster game with 14 points on 12-of-14 free-throwing shooting.

But everything turned when Faulkner picked up his third foul while guarding Reynolds star Travis Holcomb-Faye. Faulkner spun in disgust and yelled something that drew a technical foul. Just like that, Davie’s main man had picked up his third and fourth personals. He sat for the next 10 minutes. Reynolds took full advantage and won going away, 86-69. The Demons (21-3) went on to win the tournament.

“I thought the game plan went pretty well until we just lost a little discipline there, which is part of the learning process,” Young said. “Those things happen. It was a couple of calls that irritated (Faulkner) and it irritated me, too. But we have to learn to handle that, keep our mouths shut and go on.”

But qualifying for the 4-A playoffs was a major achievement. When the War Eagles traveled to North Forsyth, they were in the postseason for just the second time since Davie joined the NCHSAA in 1977-78.

For the season, Faulkner averaged 16 points, Whelan 12.7, Jason Neese 11.5 and Phillips 9.7. Seniors Faulkner and Whelan were named to the all-conference team.

The top three scorers would graduate, but little did anyone know that Phillips would develop into an overwhelming talent between his sophomore and junior year.