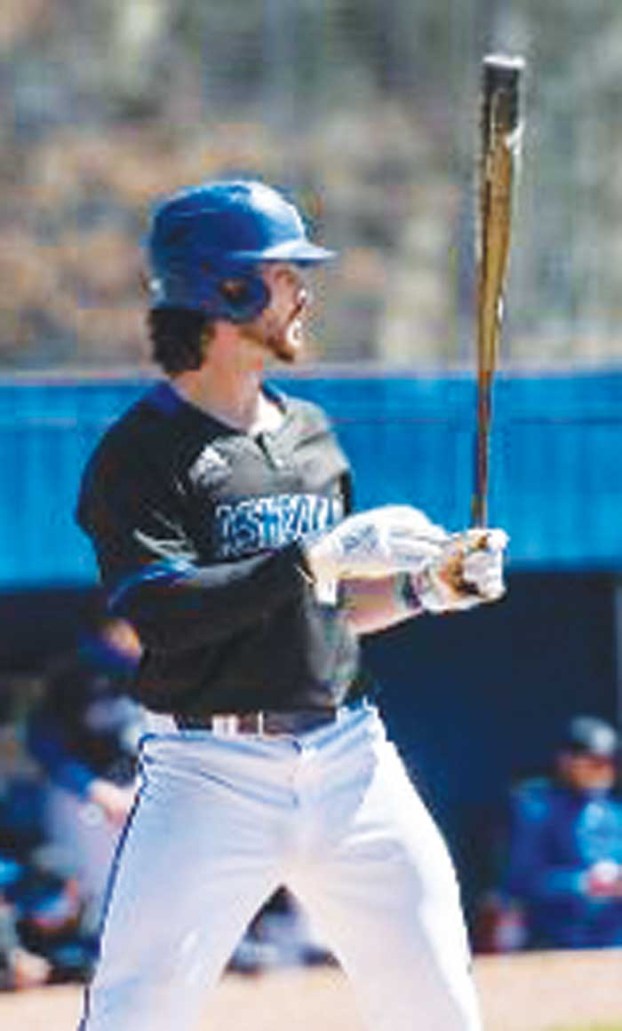 Brandon Lankford should be about 40 games into his senior season, so he should be right around the UNC Asheville career record for home runs.

When the COVID-19 pandemic ended all sports seasons – the Bulldogs’ final game was March 11, just 16 games into the season – Lankford stood at 35 homers, just seven from Brian Shehan’s school record.

Since the NCAA granted all spring athletes another year of eligibility, Lankford will get a redo on his senior year – if he doesn’t get drafted or sign as a free agent this summer and begin a professional career.

The 6-2, 215-pound slugger from Mocksville has had a tremendous career in Asheville, a middle-of-the-order hitter, the third baseman and an indispensable rock since Day One in 2017.

As a freshman, he did something unthinkable – getting a hit in the first 12 games of his collegiate career.

“It was surreal,” Lankford, a 2016 Davie High graduate, said. “I remember going back to my dorm room and talking about it with my roommate Chris. I remember joking around about it. I was like: ‘Man, this is kind of easy.’ Right after that, I went in a slump for probably 10 games. It was like the baseball gods were telling me something.”

“That was really cool,” he said. “Those games are unreal. You get amped up going to places like N.C. State, Carolina, Florida State, Tennessee. Those Carolina games are always fun. It was a good crowd there and it’s a nice play to play.”

In the 2017 Big South Conference Tournament in Lexington, S.C., the sixth-seeded Bulldogs made a stirring push. In an elimination game against No. 2 Liberty, Lankford lifted UNC-A to a breathless win with a go-ahead home run in the top of the ninth.

Liberty’s Shane Quarterley, who had allowed one homer in 45.1 innings coming in, carried a 1-0 lead into the ninth. There was a single, but there were two outs when Lankford stepped up. Quarterley offered a 1-2 pitch and Lankford dropped the barrel, crushing a two-run homer to left, the ball traveling over 400 feet. The Bulldogs won 2-1 for their first conference tournament triumph in nine years. The blast also gave them their 24th win, the most in five years. Liberty was sent home at 32-24.

“That was a huge upset,” Lankford said. “That was the craziest thing that’s ever happened for me. That was a dream right there, seeing the ball come off the bat.”

One day later, UNC-A beat pitcher Isaac Campbell (another former War Eagle) and Gardner-Webb, 6-3, thanks to a five-run seventh. Lankford had two hits and two runs as the Bulldogs won two tourney games for the first time in 10 years.

“We lost the next game to Radford,” he said. “We were done on pitching.”

Lankford was named a Freshman All-American by Collegiate Baseball News, the first such honor for the Bulldogs in 13 years. He earned Big South Conference All-Tournament honors, the first Bulldog to earn that in 11 years.

Lankford went on a legendary home-run tear as a junior. He slugged 15 to rank second in the conference. He was among the top 40 in the country when the regular season ended. The homers were the most by a Bulldog in 15 years and it’s good for fourth on the single-season list, four behind the record. For the season, he hit .287 with 54 hits and 35 RBIs, including a three-hit, six-RBI performance against Georgia Southern. He also led the team in total bases (109), runs (44) and slugging percentage (.580). He was named Big South First Team All-Conference.

“That was a lot of hard work with my hitting coach, just grinding every day and getting the little details down pat,” Lankford said of the home-run binge. “It was trusting my homework, having muscle memory and trying to be aggressive. It was a fun season.”

From the first game of 2020, it was quite obvious that opposing pitchers were working Lankford carefully. Through 13 starts, he had two homers, not the pace he enjoyed the year before. But he resisted the temptation to chase out of the zone, taking a team-high nine walks, along with two hit by pitches. He was second in average (.283, 13 for 46), second in homers, tied for second in doubles (four), tied for second in RBIs (nine) and tied for third in runs (seven).

“I could tell the first weekend at Samford I was already getting pitched backwards,” he said. “I was preparing for that coming into the season. I was getting pitched around a good bit throughout the year. I was trying to be aggressive with anything in the zone and laying off if it wasn’t there.”

Oh, and one thing more: Lankford had one error for the season, resulting in a .963 fielding percentage. The one miscue came on a bunt in which Lankford charged and threw offbalance to first.

“I definitely worked really hard in the offseason to get really good at third and have more people believe that I could be a good third baseman in the long term,” he said.

The coronavirus shut everything down after UNC-A’s game on March 11. It was 5-11 but had won three of four. Lankford’s career-homer total (35) represents the most by a Bulldog in (gulp) 30 years. Shehan cranked 42 from 1987-90. Also on the career list, he’s tied for third with 26 hit by pitches.

“It happened really fast after our game at Georgia State,” he said of the shutdown. “When we got on the bus, we heard the NBA cancelled their season. It was really weird. We couldn’t really process what was happening. Everyone had questions and no one could really answer them. No one could have ever guessed that would happen.”

According to feedback from scouts, Lankford was looking to get picked between the 10th and 20th rounds. Since 2012, the Major League Baseball Draft has consisted of 40 rounds. But like everything else, MLB is being hit hard by the fallout from COVID-19. Therefore, there will be a cut in the number of rounds. This summer’s draft will have a maximum of 10 rounds and a minium of five; the exact number is yet to be determined.

That means Lankford’s 2020-21 prospects are up in the air. He could be playing professionally; he could be in Asheville for another senior year.

“Most of the seniors are coming back and we’re going to live together,” he said. “So it will be a little last hurrah. But I’m hoping that the draft works out. I’m hoping if I don’t get drafted, I can get an opportunity as a free agent. It could go one of two ways. I’m hoping a team will give me a shot. It’ll work out either way, whatever is meant to happen.”

In the first three matches of the season, Davie’s tennis team was playing chess, while its opponents were playing checkers.... read more