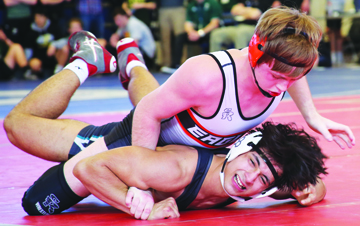 Junior Matthew Downey picked up 3 wins at 145 in the regional and finished the season 28-8. - Photo by Ashley Bowden

You had to feel for Perry Long. Replacing Buddy Lowery, who guided Davie wrestling from 1976-2019, must have felt like the guy who married a widow who kept her late husband’s photograph by the side of her bed.

From Nov. 20 through Feb. 4, the War Eagles suffered a series of heartbreaking losses, going 2-7 in matches decided by single digits. It was maybe the youngest team ever, which led to the most losses (17) ever. They probably considered sacrificing a chicken. Instead of chasing a chicken, they kept plugging.

On Feb. 15, after Davie had been idle for 10 days following  a loss at Mooresville in the second round of the dual team state playoffs, you had to feel good for Long and his War Eagles. With four freshmen, four sophomores, three juniors and one senior wearing Davie uniforms, the War Eagles earned sixth place out of 20 teams in the Midwest 4-A Regional. The event was held at Ragsdale on Feb. 14-15.

Long hauled 12 guys to Ragsdale. Half of them finished in the top four in their respective weight classes to qualify for the state tournament. It was a marvelous day. For perspective, between 2010-19, Davie qualified five, seven, seven, four, three, four, three, seven, eight and eight wrestlers for the state. Over that 10-year period, Davie averaged 5.6 state qualifiers. That’s right. Davie met standards from the storied past with six qualifiers.

“Man, I was excited,” he said after Isaac Webb, Jack Jarvis, Adam Szewczyk, Collin Bailey, Lane Hill and Tyler Snyder advanced. “We didn’t come away with a regional champion, but most of the kids on the podium were seniors. I thought we had a great regional run. I’d like to have gotten (Matthew) Downey in. He had a tough draw. He had a real tough draw. I’d like to have gotten (Tyris) Griffin to the state. … It was emotional. I thought we took big steps toward becoming a great team in the future.”

Webb and Jarvis, both sophomores, turned in the top performances by finishing second at 152 and 160, respectively. Webb went 3-1 over two days to earn his second state berth; last year he was second in the regional at 152. Jarvis went 2-1 after receiving a first-round bye as he also qualified for the state for the second time. Last year he took fourth at 145.

“Isaac wrestled tough,” Long said. “He lost by one point in the finals. Jack had a great day.”

Before reaching the regional, Szewczyk went 39-9 at 126, but he cut down to 120 for the regional. With an .812 winning percentage at 126, you know the junior was brimming with confidence at 120. Right on cue, he kicked some butt in his new division, going 5-1 and placing third.

Last year Bailey went 37-14, a fabulous record for a freshman. The only significant blemish on his resume was an excruciating loss in the “blood round,” the consolation semifinals to decide who advances and who packs it up. The score was 12-11.

This time Bailey seized the moment. He opened with back-to-back pins. He faced adversity with a decision loss that sent him to the consolations. At the moment of truth, he came up with a pin to punch his ticket to the state. He followed with his fourth pin in two days to claim third place at 138. The pin in the “blood round” was breathtaking.

“Collin was devastated (after losing in the winners’ bracket),” Long said. “This year he won in the blood round and he hugged me. We will grow as a team no matter what people say.”

There were goosebumps when Hill, a sophomore, and Snyder, a junior, achieved fourth places at 126 and 132, respectively. Both went 4-2 for the tournament.

Hill’s fourth was especially impressive because Szewczyk’s move down to 120 meant Hill had to either challenge Szewczyk for that spot or move up to 126. Hill unselfishly slid up after mashing 41 opponents – out of 54 tries – during the season at 120. That he bumped up and still qualified for the state says a lot. Meanwhile, Snyder racked up four pins.

“I knew Tyler had a tough road, but every match Tyler can impress you. And at any given time, he can beat anybody.”

The Davie varsity boys basketball team was in a tailspin after losing to West Forsyth, Reynolds and Glenn, three Central... read more