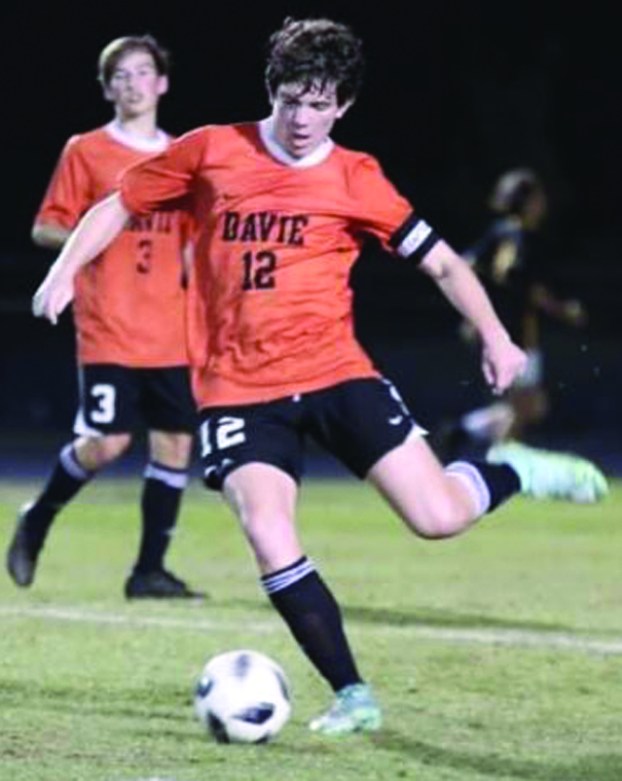 Varsity soccer getting better every day

After getting outscored by a combined 37-0 in the first five Central Piedmont Conference games, Davie soccer fans probably wondered what awful news awaited them down the road. After winning five games in six seasons, it was hard to see a light at the end of the tunnel.

But what has happened since a 6-0 loss to West Forsyth on Sept. 27 is truly and utterly inconceivable. Davie showed tremendous resolve in a 1-0 loss to Parkland. That was followed by two more defeats with honor, defeats that were more impressive than the 2-2 tie against Starmount and the 5-1 win over East Rowan.

“We are getting better every day,” coach Jason Clark said.

The War Eagles’ up-from-nowhere competitiveness continued against visiting Reynolds on Oct. 6. They battled fiercely in a 3-2 loss, a seven-goal swing from the first meeting. For perspective, the Demons had outscored Davie 77-5 since Davie’s 2-1 overtime loss in 2015.

The standings show Davie at 1-11-1 overall and 0-8 in the CPC. The records show Davie with a 67-game losing streak in the CPC. But its astonishing efforts for three games running give plenty of hope for the Clark era. How have the War Eagles come so far so fast? They are now understanding Clark’s master plan and what he expects.

“It’s nuts. It’s crazy,” Clark said. “Three games in a row we lose by one goal, and those are teams that are competing for the top of the conference. Two of them beat us in the last five minutes. It’s unbelievable to see this happening. It’s awesome. I’m so proud of these boys.

The Demons took a 2-0 lead to halftime and then bumped it to 3-0. Davie was at a crossroads. “It was a decision point for them,” Clark said. “Were they going to quit or were they going to fight? They chose to fight.”

Davie fought back in contention on two goals by freshman Alex Tarbet. He was assisted by seniors James Little and Brian Reyes.

“I’ve had (CPC) coaches call or text me and say: ‘What just happened? That was not the game we were expecting to see,’” he said. “I’ve had coaches tell me they watched our game online because they wanted to see the team we were playing. They weren’t trying to watch us. There are some really good teams and coaches in this conference.”

That this team has kept fighting when the fight seemed lost has had much to do with center midfielder Reyes and juniors Nick Ruff, a center back, and Kevin Morgan, an outside fullback.

“They have turned into leaders on and off the field,” he said. “It’s great to see.”

The dramatic improvement can also be traced to freshmen A. Tarbet, Karson Yount, Felipe Flores and Alex DelCarmen and sophomore Will Davis.

“We’re starting seven freshmen every game,” he said. “We have not stopped that in four weeks. We figured out a little secret sauce that’s working for us. One sophomore who is making a huge impact is Will (at outside fullback).”

Davie’s junior varsity is winless and still dealing with a steep learning curve. It lost 7-0 to Reynolds.

By Brian Pitts Enterprise Record The Ellis and South Davie soccer teams put on a heck of a show at... read more