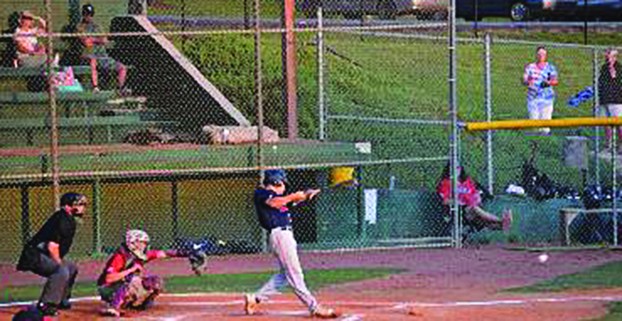 Pitcher Joe Gaither kept the Mocksville Senior Legion baseball team on the rails until the offense found a way.

And the offense eventually found a way, with a huge assist from the other team. Mocksville made the absolute most of its opportunities and pulled out a 6-1 victory at Concord on July 2.

Believe it or not, Mocksville scored those runs on two hits. Concord’s pitchers walked seven and its defense was woeful, committing five errors.

No one had to tell coach Charles Kurfees that his team got away with one. The late rally lifted Mocksville, which has lost eight of 11 overall, to 2-1 in the Southern Division.

“That’s unreal. We got lucky because they couldn’t field it and they started walking guys,” Kurfees said. “Then the errors mount up when you start walking people. You know how that goes. We’ve been in that predicament before.”

Gaither was terrific on the bump. He went the distance while firing a two-hitter. The only run he allowed was unearned, he walked none and struck out six.

The only base runner in the first two innings was Mocksville’s Trot Byerly, who slapped a two-out single in the second. Teammate Blake Little drew a two-out walk in the third, but the next man struck out. Concord threatened to get first blood in the third when it got a one-out single and stole second. Gaither had the answer, striking out the next two batters.

In the top of the fourth, Mocksville went down 1-2-3 for the second time, and in the bottom half, Concord took advantage of Mocksville’s defensive mistakes. Two errors were followed by a run-scoring single. Concord had a chance for more, but Gaither induced the third out with two runners in scoring position. That kept his team within striking distance.

Byerly and Jovany Mendez got on base to start the fifth, but Mocksville could not push a run across. But Gaither kept coming through, retiring the side in order for the third time in the Concord fifth.

The game turned in the sixth. Reed Cunningham walked and Joe Johnson reached on an error. With one out, Justin Hayes reached on an error. With the bases full, Byerly put a ball in play that pushed in the tying run. With runners at second and third and two outs, Mendez delivered the big hit, a two-run double. It was Mocksville’s second and final hit.

Now with Mocksville ahead 3-1, Gaither kept adding to his masterful effort. He got Concord 1-2-3 in five of his seven innings and retired the last 12.

Not that he needed any more help, but Mocksville did manage three more runs in the seventh just for good measure. Again, it got plenty of help from the other side. Walks to Cunningham, Johnson and Landon Lowtharpe loaded the bases for Hayes, who lifted a sac fly. An error on Byerly’s ball loaded the bases again. When Mendez reached on another error, two runners came home to make it 6-1.

Gaither, who yielded four base runners, is a recent addition to the team. He was playing in a college wood bat league for the Mocksville Muscadines. He became the second college guy to quit the Muscadines and join Mocksville, the other also a pitcher (Brett Johnson). Both additions have provided huge boosts, Johnson throwing a complete-game shutout a few days earlier against Mooresville.

“Gaither is going to throw strikes and that’s the key,” Kurfees said. “Then you’re going to give yourselves a chance to win.”

Notes: While Byerly and Mendez had the only hits, Cunningham walked twice. … Johnson and Gaither are both North Iredell graduates from 2020.