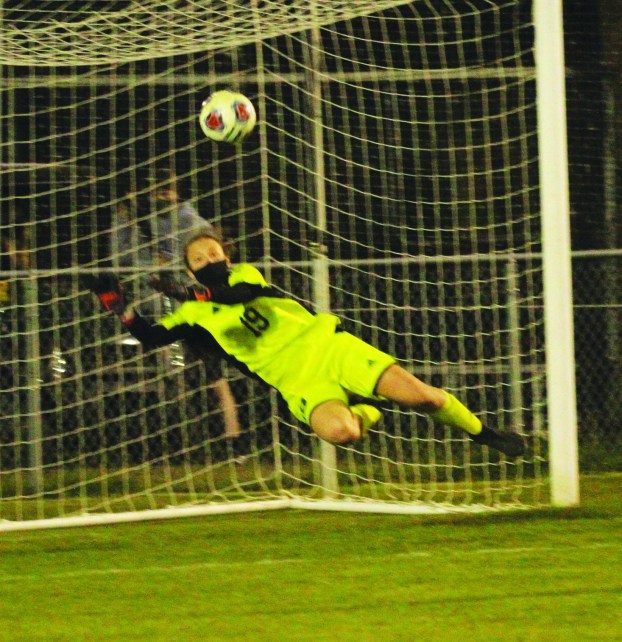 Davie’s varsity soccer team played well for a half, but West Forsyth’s superiority took its toll as the Titans pulled away to a 5-0 victory in Clemmons on April 20.

It was only 1-0 at halftime. It ended up being a runaway as West improved to 7-1-1 overall and 5-1-1 in the Central Piedmont Conference.

“We played well and competed,” coach Nathan Stephens said. “We had a plan going in and executed it pretty well. When you play a top team like West, there has to be a strategy to slow them down. Otherwise they will punish you very quickly. We held our own and did not make it easy.”

If the War Eagles were not quite as good as they hoped to be against the visiting Bobcats on April 22, they were good enough to halt a three-game losing streak.

“It could have very easily not been a good night because we didn’t play really well,” Stephens said. “But we stuck with it and endured to get the win.”

Senior Caroline Bliss scored in the first five minutes with an assist from junior Katie Shupe. Even though Glenn (0-10, 0-7 CPC) has been outscored 70-6 on the season, it kept the score 1-0 for a long time.

“You could tell early that we had the advantage,” he said. “As time went on – I’ve got to give Glenn credit – they came in with a good game plan and packed it in very tight. We had possession of the ball the majority of the time. It’s just they had everything so compact on their defense that we could not penetrate and get through to get good shots.”

It was still 1-0 deep into the second half. Davie finally broke away in the final 10 minutes. The separation began with Shupe’s successful penalty kick. For good measure, sophomore Lexi Kulis scored on a breakaway as Davie improved to 4-5, 2-5.

“That’s one of Lexi’s strong suits and finally it opened up for her at the end,” he said.

While Davie ripped off 31 shots, its defense limited Glenn’s attacks. Sophomore goalie Avery Yount only had to make four saves, but each one was crucial in a game that wasn’t decided until late.

“They didn’t have the ball a lot, but they did have a couple girls with a really strong foot,” Stephens said. “They had some shots. Avery didn’t have but four saves, but the saves she did make were good ones.”