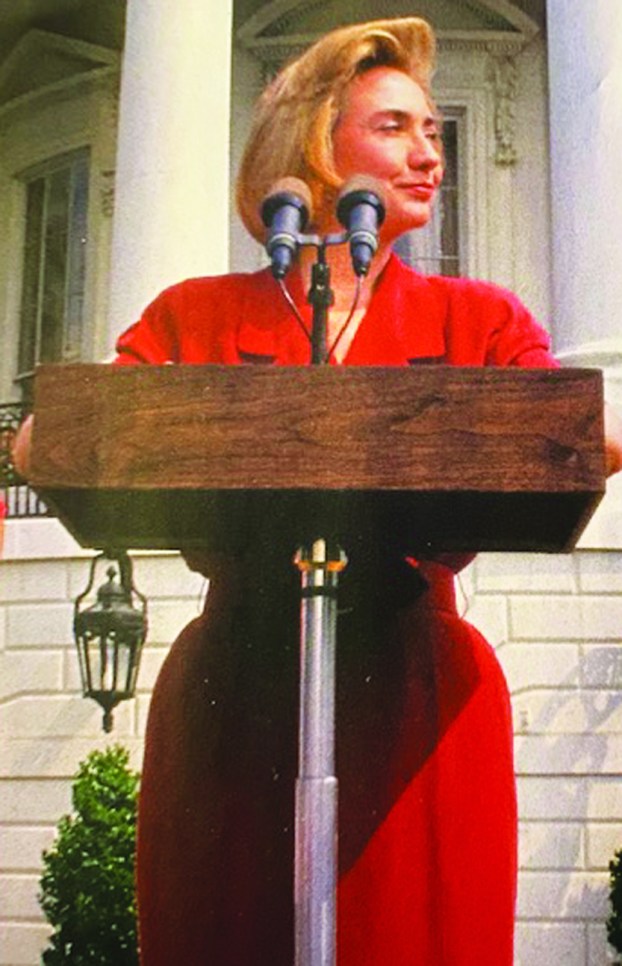 First Ladies: Hilary Rodham Clinton one of the most politically active

Hillary Rodham Clinton, the wife of the 42nd President of the United States, William Jefferson (Bill) Clinton, was active politically.

She was involved in policy making as well as carrying on the duties of the First Lady. She was the first First Lady to have an office in the West Wing of the White House, the area where the Oval Office is located, in addition to an office in the East Wing. In the rankings of First Ladies by people who do such ratings, Mrs. Clinton is usually included in the top five.

In Chicago on Oct. 26, 1947, a baby girl was born to Dorothy Howell Rodham, who was somewhat liberal, and Hugh Rodham, who was a conservative Republican paint store owner. The Rodhams named their daughter, Hillary Diane.

Hillary and her two brothers grew up in a middle class neighborhood, Park Ridge, Ill., a suburb of Chicago. Hillary had a happy childhood doing the things that children enjoy—playing ball, riding bicycles, etc.  She went to public school in Park Ridge.  She was a hard-working student.

Her loving parents always expected their children to do the very best that they could, and Hillary did just that. Even as a child, Hillary wanted to help those who were less fortunate. When she was 10, she and another girl did a project to raise money for the United Way. Hillary was involved in and enjoyed the youth activities at her Methodist Church. During her high school years, Hillary was a Republican.  She supported Goldwater for president even wearing cowboy boots and a western hat.

Hillary graduated from high school in Park Ridge and then enrolled at Wellesley, a private liberal arts college in Massachusetts, located hundreds of miles from her home. After graduating with honors from Wellesley, she went to Yale University Law School. Hillary worked hard at Yale as she always had in school. One day while she was studying in the library at Yale, a fellow student was attracted by the lone student who seemed so involved in what she was studying. That student went over and introduced himself. His name was Bill Clinton. That was the beginning of the long Hillary/Bill relationship.

After graduating from Yale, Hillary and Bill Clinton went in different directions. Hillary got a job with the Edelman’s Children’s Defense Fund—that was the beginning of her lifetime interest in child welfare. After that job, she worked for the Congressional Committee that investigated President Nixon’s involvement in the Watergate break-in.

By that time Hillary had become a Democrat.  Meanwhile, Bill Clinton became a Rhodes Scholar and went to study at Oxford in England. After the time in England, Bill came back to the United States and settled in Fayetteville, Ark., his home state. He got a job teaching at the University of Arkansas.

After Nixon’s resignation, Hillary could have gotten a high-paying job at a Wall Street Law Firm, but instead she decided to go to Arkansas. Bill was surprised because he did not think the big city gal would want to move to a small town in Arkansas. Hillary also got a job teaching. Bill and Hillary got married in 1975 in their little brick house near the University campus. Hillary, kept her maiden name, which seemed to cause trouble later. Hillary was 27 and Bill was 29 when they were married.

Bill Clinton had been interested in politics ever since he had attended Boys’ Nation in Washington and shook the hand of President Kennedy in the early 60s. The same year that they were married, Bill ran for attorney general of Arkansas. He won the election.  The newlyweds moved to the state capital in Little Rock. Hillary got a job at the Rose Law Firm, where she was successful.  She also became a member of the Legal Services Corp. which helped people who could not afford a lawyer.

In 1978, Bill ran for the office of Governor of Arkansas and won. The Clintons moved to the big Arkansas Governor’s mansion. In February of 1980, the Clintons’ daughter, Chelsea was born. That same year Gov. Clinton ran again and was not re-elected. The pundits thought that he tried to do too much too fast.  Hillary was afraid that the people of Arkansas did not like the fact that she kept her maiden name and that  had something to do with the loss. She had her name changed to Clinton.

Bill ran for Governor again two years later and won. Bill Clinton served as Governor for a total of ten years.  During that time Hillary’s interest in the welfare of children continued and she founded the Arkansas Advocates for Children and Families.

The Clintons decided that Bill would run for President of the United States in 1992. He not only won the nomination as the Democratic candidate, but he also won in the general election defeating the incumbent President, George H.W. Bush. The Clintons moved into the White House. Mr. Clinton had said that the American people would be getting two for one if he was elected because he meant to make Hillary a true partner.

Soon after he was elected, he put Hillary in charge of developing a universal health care program. The capable Hillary got right to work. She chose top-notch people to work with her and they developed a comprehensive plan. By the time that the plan was completed, both the House and the Senate had become majority Republican, and, also, the plan was so comprehensive that it was hard to understand. The result–it was defeated. Hillary was humiliated and kept a lower profile for some time.

Bill Clinton served as President for eight years. He had some successful years and some rough ones such as the one in which he was impeached. Hillary stood by her husband through thick and thin. At the end of Clinton’s second term as president, the family moved to New York.

Hillary decided to seek the Democratic nomination for one of New York’s seats in the U.S. Senate in 2000. She not only won her party’s nomination, but also the general election. She won praise for her hard work while serving as a senator. She studied every bill and represented New York well, so well that she was re-elected in 2006.

In 2008, she decided to seek the office of the President of the United States.

After Mr. Obama had served two terms, Hillary Clinton once again sought the Democratic nomination for president. That time she became the Democratic candidates but was defeated by Republican Donald Trump.

After that hard campaign during which Hillary’s husband, Bill Clinton, was her chief cheerleader, the Clintons moved to their home at Chappaqua, N.Y.  They are now the proud grandparents of the three children of their daughter, Chelsea, and her husband, Marc Mezvinsky.

Hillary is quoted as saying, “Bill and I are over the moon to be grandparents. One of the happiest moments of our lives.”

Bill and Hillary were always good parents through all the years that they were on the political bandwagon, and, now, they are enjoying being grandparents. The Clintons have been busy writing. They have also worked on planning and building the Clinton Presidential Library in Little Rock, Ark. That modern structure houses an outstanding library which provides much information about both the former president and his wife.