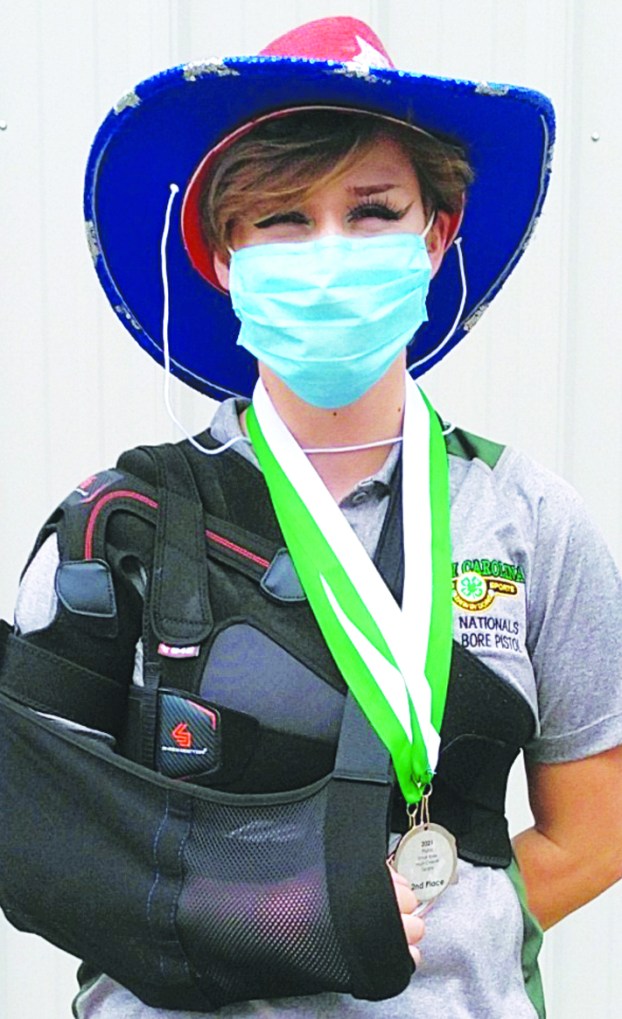 Jimmy Staley coached the shotgun team that did not have any participants from Davie other than the coach.

Rebekah had individual finishes of ninth and eighth for Days 1 and 2 events and finished seventh overall. Her Smallbore Pistol Team, Coached by Maurice Walker had two third places and a  fifth place on the three days and won silver for the overall pistol competition.

Caleb had a fourth and an eighth in the daily awards and finished 10th overall as an individual. He and Samantha brought home a silver, a bronze and a gold for the daily team events and team gold overall as team national champions for muzzleloader.

Their teammate, Luke Chappin from Iredell County 4-H, was overall individual national champion for muzzleloader. This was also the first time a North Carolina muzzleloader team won the overall gold.

In hunting skills, the team had two bronzes and a fifth place finish for the three days and finished with a third place overall.

Naomi had a fourth on Day 3, Stephen won a bronze on Day 1 and a seventh on Day 2.

Jacob Durham struck gold on Day 3, making him a national champion for Day 3.  Jacob ended up fourth overall and  Stephen seventhth with Naomi just missing the stage with an 11th by less than a 1/100th of a point.

Jimmy Staley’s shotgun team had a Day 1 individual national champion and two daily fourth place team finishes  and a seventh. The team ended up fourth overall making it the best finish ever for a North Carolina 4-H shotgun team.

This year’s national championship featured competitors from 36 states. The North Carolina team finished second behind Louisiana for the second time.

“We really racked up a lot of awards with our kids and it kind of makes it sound like it’s a feel good, everyone goes home with a trophy sort of thing, but it certainly is not,” said Nelson Cowden, Davie 4-H shooting sports adult leader. “There are close to 1000 kids in this tournament with nine different competitions and 90 percent or more go home  with nothing but fond memories and a t-shirt. I know, we have been there.

“This is the fifth time we have had kids make the North Carolina teams and by far the most successful group. Caleb won a daily gold in 2019 and Stephen Walker, who now has aged out of 4-H won the overall championship for smallbore pistol in 2018. We’ve brought home some medals and ribbons in the past, but nothing like this haul.”