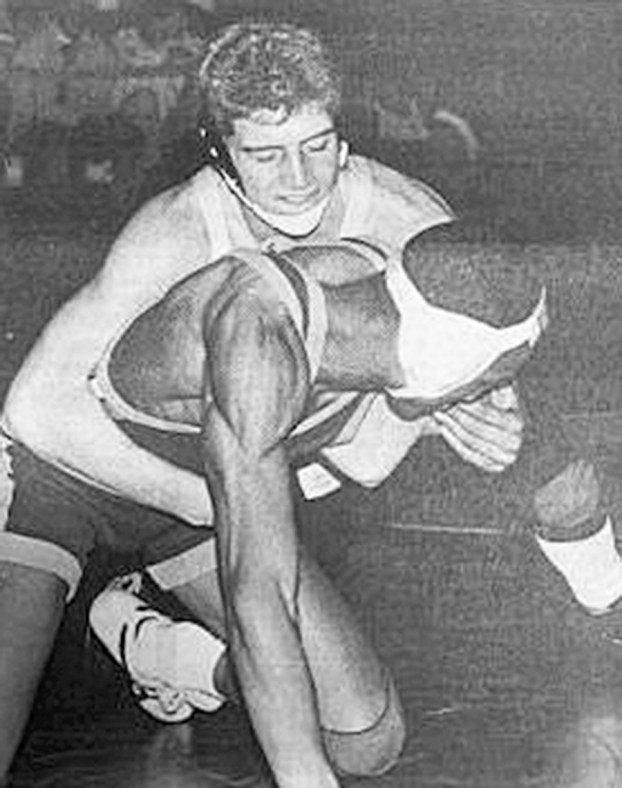 Second in a series on Davie’s all-time individual state champions.

The 1988-89 wrestling season was Davie’s 12th year in the North Carolina High School Athletic Association. In March of that year at East Forsyth High, Scott Beauchamp did something that no War Eagle wrestler had done – he won the state championship.

Going into the season, it was easy to see where Beauchamp was headed. The year before as a junior, he went 29-4 and finished third in the state.

“He’s not flashy and you never hear anything out of him,” coach Buddy Lowery said in a preseason article. “But he’s a hard worker who makes things happen.”

As always, the War Eagles were a fantastic team. They opened the season by claiming the annual King of the Mat tournament at North Davidson. By scoring 232.5 points to runner-up East Davidson’s 130, Davie won the event for the seventh time in its 10-year history.

After ripping Starmount, a dominant 2-A program, by 36 points, Davie cruised to first in a nine-team tournament at South Rowan. Then it blistered Wilkes Central 65-6.

Davie rose to No. 1 in the Mat News poll, passing Cary, as it prepared for a legendary tournament, the WRAL at Athens Drive in Raleigh. The field included No. 6 East Mecklenburg, No. 10 Fayetteville 71st and South Carolina’s premier program, Rock Hill.

“It’s the toughest tournament a team of mine has ever been to,” Lowery said. “I’ve been gunning for No. 1 for 13 years and now we get the chance to see if we deserve to be there. This is going to be like a state tournament final.”

“We wanted to come in here and prove that we were the best in North Carolina – and we did that,” Chaffin said. “Nobody can question us now.”

Now it was time for the Central Piedmont Conference slate, and Davie terrorized the league. The War Eagles breezed past Parkland, which was 9-0 and ranked seventh in 4-A. They did the same to North Davidson (51-10), Mt. Tabor (67-0), Reynolds (55-12) and West Forsyth (69-3). That made Davie 29-0 all-time in the CPC. Due to a measles outbreak in Rowan County, matches against South Rowan and Kannapolis were canceled.

As expected, the CPC Tournament at Parkland, which was held behind closed doors due to the measles epidemic, was anti-climactic. Davie had 197 points to second-place Kannapolis’ 114.5. Seven War Eagles walked away with conference titles: Foster, Beauchamp, Jamie Caudle (135), Scott Page (140), Jon Myers (145), Erik Blankenship (160) and Chaffin.

“It was about what I expected,” Lowery said.

The season reached another peak when Davie captured the 18-team Midwest Regional at Watauga. The top three teams were Davie (170), South Stokes (146) and East Forsyth (127). Foster, Beauchamp, Page and Blankenship were gold medalists as Davie won the regional for the third year in a row. A total of nine War Eagles qualified for the state by placing in the top four, including Caudle, Todd Kiger (152), Marty Martin (171), Chaffin and Todd Smith (heavyweight).

The state tournament was held at East Forsyth. It was a showdown for the ages between Davie and Cary. Going into the championship round, Cary had an 84.5-82 lead over Davie, which had three in the finals to the Imps’ two.

The drama was unreal. When Beauchamp delivered at 125, Davie had its first lead of the tournament, 86-84. When Cary’s undefeated Pat King (42-0) won at 130, Cary regained an 88-86 advantage. In an excruciating finish, Davie lost at 140 and heavyweight and lost to Cary 88.5-86. The tightest margin in state tournament history wasn’t decided until the final match, and the Imps escaped for their third straight title. It was Davie’s second straight state runner-up.

“We wanted to win this badly and we did about everything that was expected of us – but win,” Lowery said. “You have to hand it to Cary. They wanted to win it just as much as we did.”

“I never dreamed this would happen,” Cary coach Jerry Winterton said. “My heart goes out to the Davie kids.”

As stinging as the 88.5-86 score was, the War Eagles could take solace in watching one of their teammates make program history.

Beauchamp’s ride to the 125 gold was wild. He mauled Northern Nash’s Marcus Neal 18-4 in the first round, but his next three matches were one-point nailbiters: 5-4 in overtime over Kannapolis’ Empsey Thompson, 5-4 over Rocky Mount’s Matthew Hicks and 7-6 over East Forsyth’s Aaron Coleman.

Even though Beauchamp had beaten Coleman 5-2 in the regional, he was taking nothing for granted. Good thing because the Beauchamp/Coleman battle for all the marbles went to the wire.

“Sometimes it’s hard to beat somebody like that,” he said. “He learns more about you and gets to know your moves.”

Right on cue, Coleman burst to leads of 4-0 and 6-3. But in the second period, Beauchamp’s reversal forced a tie at 6. In the third, Coleman was nailed for his second stalling violation, giving Beauchamp the clinching point with 1:21 on the clock.

“I gave him four early points,” Beauchamp said. “I just screwed up. He started running from me and he was stalling. It feels great to win. I wanted it. I’ve been working hard.”

Beauchamp’s comeback win capped a 26-1 season and forever reserved him a spot in Davie lore. He hugged his father Lester.