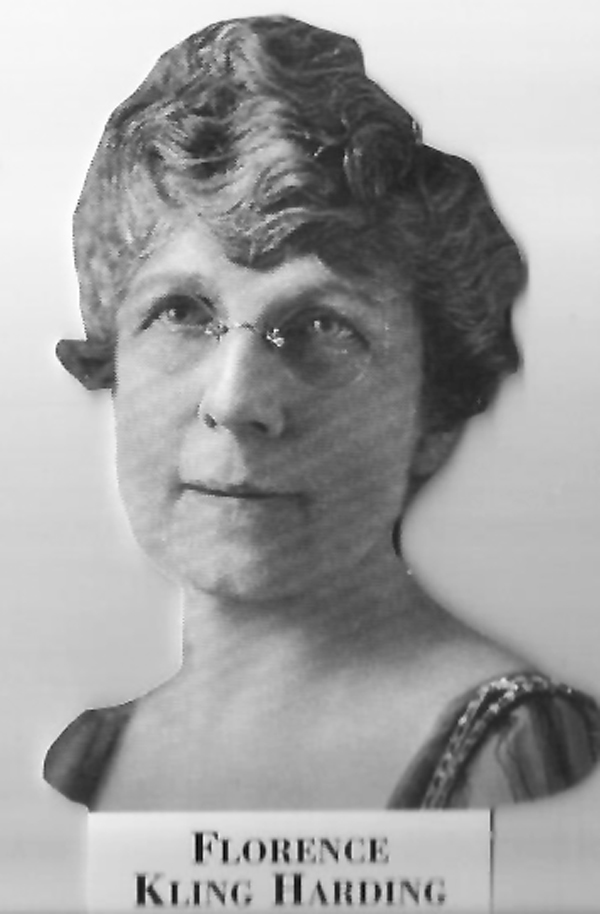 Being President of the United States was not a goal that Warren G. Harding set for himself. He was happy being a newspaper man, but his wife was more ambitious for her husband. She wanted “Waaaaaren,” as she called him, to move from one political job to another to become President.

With Mrs. Harding, who Mr. Harding called “the Duchess” probably because of her high-handed ways, moving every stone that could be moved; Warren G. Harding was elected President in 1920 and was inaugurated in January of 1921. President Harding seemed to realize that his election was a mistake. He is quoted in the book To the Best of My Ability by McPherson as saying, “I am not fit for this office and should never have been here.”

First Lady Florence Harding did not agree with that assessment. Florence Kling was born to the richest man in Marion, Ohio, Amos Kling and his wife, Louisa Bouton Kling. Florence was educated in the local school and then went to the Cincinnati Conservatory of Music. When 19, she and Henry DeWolfe eloped. The DeWolfes had a baby boy before Henry DeWolfe deserted his wife. She supported herself and her baby by giving piano lessons, and, then, she gave her son to her parents to rear.

Warren G. Harding graduated from Ohio Central College when he was only 17. He tried several jobs but was not happy until he landed a job at a newspaper. Harding and a couple of friends were able to buy the “Marion Daily Star” for $300.  Mr. Harding bought out his partners’ interest in the paper. In 1890, enter Florence DeWolfe.  Florence was attracted to the handsome newspaper man. Harding, who could never seem to resist the attention of a lady, succumbed to Florence’s’ wiles.  Harding and Florence were married a few months later when Florence was 30 and her second husband was 25.

Florence began to learn the newspaper business.  She started working with circulation and then with advertising. Soon she could manage the newspaper, which gave Warren time to become involved in Republican politics. Mr. Harding was handsome, and he was an impressive speaker.

Warren Harding ran for State Senior and won. He was successful in that role and was elected to another term before being elected lieutenant governor. He ran for governor and lost, but, in 1914, at the urging of his wife, he ran for U.S. Senate and won.

Florence Harding was thrilled. She moved to Washington with her husband and loved hobnobbing with the powerful people in that city. While he served in the Senate, Mr. Harding voted with his party and did not really criticize members of either party – which made him popular.

In 1914, Mr. Harding made the nominating speech at the Republican Convention for William Howard Taft that brought him favorable attention. Florence continued to urge him to seek the job of President but Mr. Harding wasn’t interested.

James McPherson in his book, “To the Best of My Ability, The American President,” quoted Harding as saying, “The only thing I really worry about is that I might be nominated and elected. That’s an awful thing to contemplate.”

Much to Warren G. Harding’s dismay, he was nominated on the 10th ballot as the Republican candidate for the office of President.

Florence Harding’s efforts on her husband’s behalf paid off.  Republican Warren G. Harding was elected as the 29th President of the United States.

“The Duchess” was one happy lady. She took over the First Lady’s responsibilities without hesitation.  She soon had the White House, which had been closed due to President Wilson’s illness, opened up again to visitors. “The Duchess” would often slip down to the public rooms and give surprised visitors a tour.

Paying attention to the disabled veterans became Mrs. Harding’s special project. She would visit the veteran’s hospitals and would invite World War I veterans to garden parties at the White House.

Hostess Florence Harding also served drinks, alcoholic drinks, to Mr. Harding and his buddies during their poker games at the White House, and that was during Prohibition. The White House seemed to have no trouble getting alcohol. Mr. Harding had another vice which Mrs. Harding may or may not have known about. He was and had always been a womanizer with a capital “W.”  He had a long term affair with one of Mrs. Harding’s friends, Carrie Phillips. It was reported that the Republican Party paid Phillips hush money.  He also had an affair with a young girl, Nan Britton. There were reports that Harding and Nan made love in a closet off the Oval Office. A trusted Secret Service man would give Harding a special signal if the Duchess was approaching. Nan Britton had a baby, which Harding never saw but who he supported all of his life. After Harding died, Nan said she needed money so she wrote a book titled, “The President’s Daughter.” Literature does not reveal how much Mrs. Harding knew about her husband’s womanizing; maybe she loved Warren so much that she just put up with it.

Mr. Harding chose the members of his cabinet after his election. He made some good choices, but history reveals that some of the men he chose had no scruples. Several of those chosen for the cabinet came with the Hardings from Ohio. He chose Albert Fall as Secretary of the Interior, Harry M. Daugherty as Attorney General, and Col. Charles Forbes to be in charge of Veteran’s Affairs. It came to light that Mr. Forbes was selling supplies from the veterans’ hospital warehouse to individuals or businesses and pocketing the money.  Mr. Fall’s had public land transferred to the Interior Department and then leased the land to oil prospectors, who paid him $400,000—money that he kept for himself. That became known as the Teapot Dome Scandal.  Mr. Daugherty took bribes to help certain prisoners.

Mr. Harding probably did not know that all of this was going on, but he knew things were not right.  According to the book, The American President, by the Kunhardts, Harding said, “My God, this is a hell of a job….I have no trouble with my enemies but my damn friends…they’re the ones that keep me walking the floor at night.”

Mr. Harding was depressed and decided to take a trip to Alaska and the West Coast to get away from it all. On the way back from Alaska, Harding was stricken in Seattle, seemed better, and moved on to San Francisco. The doctors thought he was getting better, but he died suddenly while his wife was reading to him in their hotel room.  Mrs. Harding took his body by train to Washington.  People waited by the train tracks all the way across the country to pay their respects to the fallen President.

President Harding’s funeral was held in the Capitol Rotunda. His body was then carried to Marion, Ohio, and placed in a temporary vault until a proper Memorial could be built.  Mrs. Harding, who had been suffering with a kidney disease, did not seem to have the will to go on after her husband’s death.  She died a few months later, on Nov. 21, 1924, and she was also put in the temporary vault.

The Harding Memorial, a big marble structure, was built at a cost of $786,000. Since that time the Memorial has been remodeled for an additional cost of $1.2 million. That imposing Memorial is near the home that Warren and Florence Harding built in Marion, Ohio. That is the house where Warren G. Harding carried on his front porch campaigns. The house is now is now open to the public.