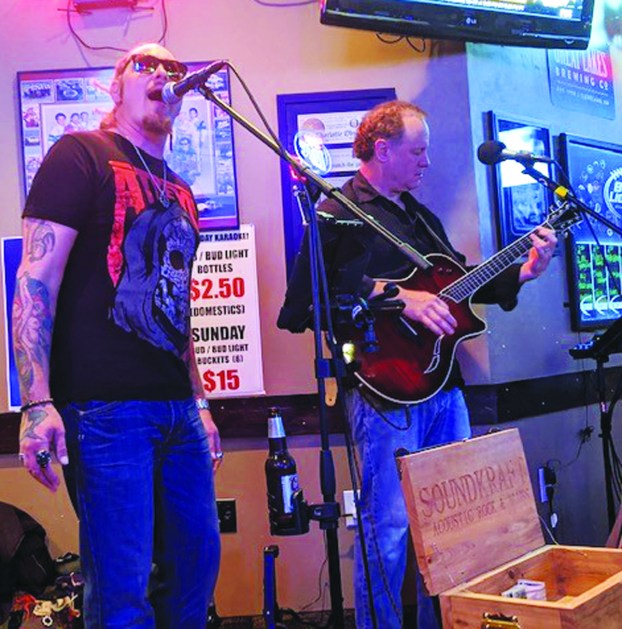 A chance meeting at a wedding, a mutual love for music, and a song choice that resonated with both led to the formation of one of Davie’s most popular duos, Soundkraft.

Scott Charest and Anthony Cope met at the rehearsal dinner of Scott’s nephew in early March 2018. Anthony is an ordained minister and was asked to officiate the wedding. One of the attendees told Anthony he should go over and talk to Scott, and they agreed to do a song together. The song choice was “Have You Ever Seen the Rain” by Creedence Clearwater Revival. Scott said he knew right away the pair had a sound that just worked.

“People came up to us and said, ‘You guys really meshed.’”

That first song led to about 10 more, and “everyone was blown away,” Anthony said. They swapped contact information, and about two weeks later, Scott called Anthony because the guy (his cousin) he normally performed with had a prior obligation and couldn’t sing at the private party on Scott’s calendar. With one practice under their belts, they played the party, and not long after, were booked to play an event in downtown Mocksville. Anthony admits to being nervous, but that gig went so well, they decided to create a 40-song set list and start booking.

“We were crafting a sound for people to enjoy,” Anthony said.

Because Anthony lived in Cooleemee and Scott lived near Charlotte, they weren’t able to get together and practice often, but in spite of that, they developed quite a following, Scott said. They played gigs in Charlotte, Clemmons, and Mocksville, adding songs that other bands weren’t covering, such as Stairway to Heaven by Led Zeppelin and Rooster by Alice in Chains, which combined music from the decades when the pair were most influenced by what they were hearing on the radio.

Growing up in the 70s in Mocksville, Scott learned to play a few chords on the guitar in summer camp, and when he was in sixth grade, he bought a cheap guitar at Rose’s.

In high school, he tried out for and earned a spot playing guitar in the Davie High Jazz Band, which he said forced him to “learn to read music, learn time signatures and really propelled” him quickly.

He played in several rock bands during high school and played a little while in college at Appalachian State University, but then settled down to married life with his high school sweetheart, Cindy Smith. He continued to play a little until his sons were born, and his “gigs” turned into strumming in the backyard to relax.

When the boys got older, Scott went to a few open mic nights in the Charlotte area, bought a cheap PA system, and started doing solo gigs.

Anthony grew up in the 80s and got into music through his stepdad, Larry. He sang in the choir at Edgewood Baptist Church and his sister taught him to play drums. He got into a few bands as a drummer, before he was approached by a band out of Statesville who needed a singer.

“I told him I could sing but they’d have to find another drummer,” he said.

He was about 33 at the time and continued to sing wherever and whenever he could, up until that chance meeting with Scott.

He said he loves music from the 90s, and Scott said, “If I can play it correctly, Anthony can sing it.”

In the summer of 2020, Scott moved back to Davie County, giving them more opportunities to practice. They have expanded their set list to 120 cover songs, playing everything from The Beatles to Cracker to Led Zeppelin to Dave Matthews. They already have about 32 events booked for 2021 and are hoping to book more.

Their gigs are mostly in the evenings and on weekends because they both have day jobs. Anthony is a general contractor and Scott owns a mattress component business.

They have no plans of stopping any time soon and hope to book gigs well outside their normal cities in the future.

“We don’t just sit around playing the same stuff over and over,” said Scott. “We’ve incorporated more complex songs, like Dyer Maker by Led Zeppelin, and will continue to do so. I think I play a pretty good guitar and I think Anthony is as good a singer as there is in this area. We love doing what we do, and I hope we can continue for as long as people want to hear us.”