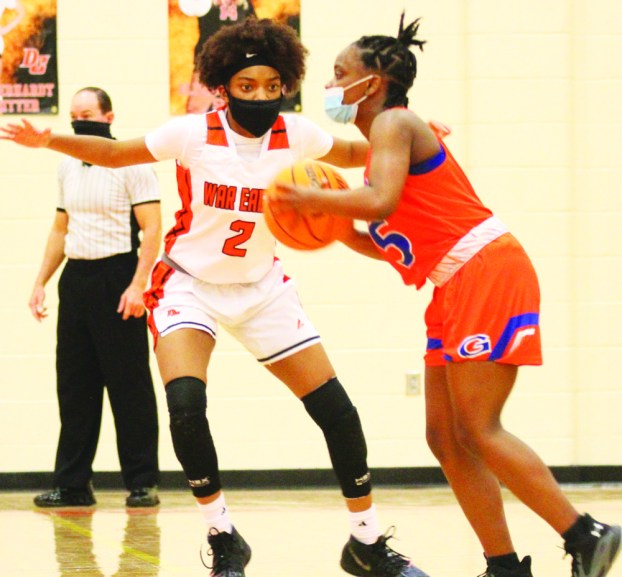 The Davie varsity girls basketball team has become the kind of overcoming-adversity story that genuinely inspires and makes every win sweet.

Not long ago, the War Eagles were carrying a 15-game losing streak in the Central Piedmont Conference. Then came two CPC wins in a span of six days – by a total of five points. The first was 51-48 over Reynolds. The next was 50-48 at Glenn on Feb. 3.

Considering  Davie went 1-29 in the CPC the previous three years and went 0-25 last year, a record like 3-6 overall and 2-5 in the league has seldom looked this good.

In Kernersville, Olivia Tatum had three steals before the game was four minutes old, but the Bobcats closed the first quarter on a 12-2 run to take a 19-9 lead. The War Eagles faced deficits of 21-11, 30-20 and 41-29 with two minutes left in the third quarter.

“I said: ‘We’ve got to pick it up. They’re not better than us. We are not going to be the only team in conference that loses to this team. We’re better than that,’” coach Lindsey Adams said. “We started getting stops and defensive rebounds.”

Davie closed the game with a 21-7 run. The comeback was nothing short of spectacular. Elizabeth Johnson scored Davie’s first five points in the rally. After Kenadi Gentry hit a runner and Somer Johnson buried a 3-pointer, E. Johnson scored with her left hand. Moments later, E. Johnson ripped an offensive rebound and scored to tie it at 43. Tatum’s free throw at 4:07 gave Davie a 44-43 lead, its first lead since it was 6-5.

Glenn had the ball with the score tied at 45, but it committed a backcourt violation. On the ensuing possession, Tatum whipped a pass to S. Johnson, who made the difference in the win at Reynolds the week before. She became one of the heroes again, nailing a tiebreaking 3 at :47.

It was a banner performance by E. Johnson, who scored 20 points on 8-of-13 shooting. She had seven rebounds and three steals in her third 20-point performance. The team’s top scorer raised her average to 12.2.

“We have plays for Olivia and Kenadi to attack the rim against man-to-man. If they stop that, then we isolate Elizabeth on the block,” Adams said. “Teams just can’t guard her. And if they do, they foul her.”

“A lot of defensive pressure comes from Olivia,” Adams said. “With her assists and defense, she makes a lot happen for us.

“Somer definitely is stepping up. I joked with her: ‘Do you just love clutch situations?’ It shows maturity and being able to focus and lock in.”

Gentry had five points and five rebounds. Keelyn Oakes and London Dirks had three points each. Layla Caldwell (two points, 11 rebounds, two assists) grabbed 10 rebounds by the 6:03 mark of the third. Davie took three charges in the second half, including one from freshman Malayka Rankin that ended the night for Glenn’s foremost post player.

“Malayka took the biggest one because it got No. 24 out of the game (with her fifth foul),” she said. “We talked about charges all day.”

• One day before the game at Glenn, Davie lost by a respectable 54-30 at West Forsyth. The Titans, who are tied with East Forsyth for first, walloped Davie by 41 in the first meeting. Davie’s scoring: E. Johnson 10, Gentry six, Tatum five, Rankin three, Oakes three and Dirks three.

• Glenn was 7-0 against Davie since joining the CPC in 2017-18 before watching Davie storm back and hand the Bobcats their sixth straight loss.