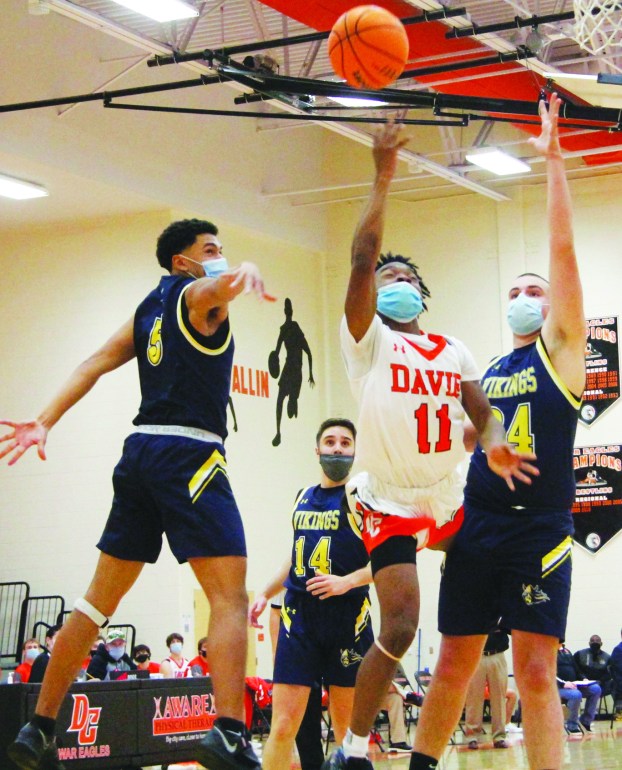 Za’Haree Maddox slashes to the hoop against South Iredell. - Photo by Mark Floyd

Last year as a sophomore, Hudson was deep on the bench, scoring 22 points in 17 appearances. In the 2021 season opener against visiting South Iredell on Jan. 7, Hudson was Mr. Everything, amassing 14 points, six rebounds and five steals and sparking a 59-39 romp. He paced Davie in all three categories. He also converted 7 of 12 field goals.

The War Eagles opened the season with two victories in three days, including a thrashing of Carson.

“Za’Haree (Maddox) picked up his third foul, we moved Zy to one and on the initial possession he got all the way to the bucket and scored,” coach Mike Absher said. “He may be our best rebounder. That’s effort; he plays so hard. Early in the game, he ran a kid down from behind and picked his pocket. Fourteen, six and five is a pretty good line.”

Hudson and senior Justus Tatum have both made titanic improvement since last winter. Tatum, who did not score in any game as a varsity junior, made his first varsity start and responded with seven points, two rebounds and one assist.

“After working as hard as Zy worked in the offseason, this is huge for him,” Absher said. “He’s worked really, really hard in the offseason to make himself a better player. Put that with the fact that he plays hard and typically good things happen.

“Not to sound like a broken record, but Justus has put in a lot of time. He’ll shoot better than what he shot tonight (2 of 8). Last year, other than giving him very specific defensive assignments, he didn’t play much. For him to step in in his first start and have the night he did, that’s really encouraging.”

That’s when Davie kicked into high gear. Hudson made a steal in the backcourt and converted a lefthanded layup high off the glass to trigger a 13-1 run. Avery Taylor and Tatum followed with 3s. Maddox hit Hudson for a backdoor layup. When Tatum hit two free throws, it was 35-24.

“In the second half, we had a lot more energy, better communication and the press shut them down, which led to some easy baskets,” Absher said.

“After what we’ve done to get to this point, it was really neat to see them get to compete and play hard for 32 minutes,” Absher said. “It was fun.”

Notes: South is coming off a 10-15 season. Davie’s record was the exact opposite. … The War Eagles only shot 31 percent in the first half (9 of 29), compared to South’s 56 percent, but they offset that by attempting 13 more shots than South. Davie was better in the second half (13 of 32). “We had one possession where we got five shots,” Absher said. “We got 37 (points) in the second half. Our shooting will only get better as we move forward.” … South missed 14 of 20 field goals in the second half.

From a shooting perspective, Maddox and Williams underperformed against South, going a combined 5 of 21. They were both prolific in the 40-point pummeling of the visiting Cougars on Jan. 9.

“It was good to see him make shots,” Absher said. “He relaxed and got in the flow of the game. He’s going to be a very important piece to what we’ve got to do this year.”

Maddox, the creative point guard who has offers from DePaul, High Point and Penn State, went 2 of 10 in the opener. His answer was 15 points and four rebounds on 6-of-10 shooting. In one stretch he made six straight shots.

“It was good to see him score better around the basket,” Absher said. “He did a great job of keeping the tempo up and attacking. We can create some havoc on defense, and he’s a sparkplug for that.”

But the early key was one of the bigs. Taylor came out smoking, hitting his first three shots, all around the basket, to stake Davie to a 9-4 lead.

“That set the tone for how we played offensively,” Absher said. “We did some high-low and he finished down there.”

“Those 14 kids, whatever combination we put out there, played so well together,” he said. “They were very unselfish. That was fun to watch.”

Lewis is a load inside. A senior, he did not play basketball the past three years, this being his first hoops action since South Davie. He’s made quite an impression on Absher. He got his points, rebounds and blocks in a late flurry.

“He made a commitment in the offseason,” Absher said. “Down the road in some of these big CPC matchups, maybe there’s a time he could step in there and do something big for us.”