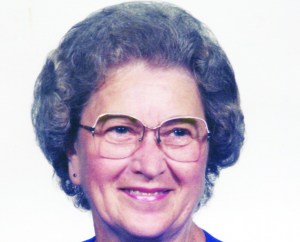 Betty Snider Stroud, 91, of Davie Academy Road, Mocksville, died on Saturday, Jan. 9, 2021 at the Gordon Hospice House in Statesville after a period of declining health and illness.

She was born in 1929 in Davie County just a few miles past where she resided. She was the 6th of 8 children, and the last surviving child of the late Phillip Hosey and Ada Murphy Snider. She started school at Davie Academy and graduated from Cool Spring High School in 1947. After graduation, she worked for Statesville Drug for 10 years. She met her future husband, James Kenneth Stroud, while attending vacation Bible school in the summer of 1950 at Society Baptist Church. He was late that evening. There was one seat left and that was beside her. They began dating and were engaged by Christmas of that year. They were married March 24, 1951 by the Rev. W.B. Rimmer of Troutman. The couple spent their first wedded years living with Kenneth’s parents, Ray and Cora Stroud.  After the birth of their first child, they bought a house in Statesville and lived there until they decided to purchase a grocery store and service station, known as Ken’s Amoco, at NC 901 and US 64.  She loved working in the store and regular customers.  She waited on customers and kept the books while he concentrated on the mechanical aspect of the business. The couple purchased land on Davie Academy Road where they built their home and lived out their remaining years.

They had a poultry farm for 40 years with Perdue, and enjoyed having black angus beef cattle until 2014. In 1978, they decided to sell the store. She was home on the farm for a few years before going to work for the Hanes Corp. She retired from there after 10 years at the age of 65.  During all the years she worked at Hanes she also worked on the farm, and in the garden canning and freezing fruits and vegetables and taking care of her family.

The couple and their children worshipped at Society Baptist Church where she sang in the choir and was church treasurer.  In 1986, they gave land to build a church. They gave 4 acres and Calvary Baptist Church was built on Davie Academy Road. While at Calvary, she was active in the church choir, the Women’s Missionary Union, and as the church treasurer until July 2020.  She was loved by so many because of the love she gave to others. She was at many bedsides of family members as they passed. She and her late husband always had a huge garden and fruit trees.  They would share their abundance of fruits and vegetables with friends and neighbors. She enjoyed canning and freezing. She was a wonderful cook. Family and church members loved her sourdough biscuits that would be devoured soon after being brought to functions. She was also a fabulous baker—many Christmases she would bake more than 3,000 cookies to be given away.

She loved to sing in the church choir, visiting shut-ins or for family and friends. She loved her family, her church family, friends and neighbors. There were many children who called her “grandma” over the years.

She loved the Lord and accepted Jesus Christ as her Lord and Savior at a young age and she followed and lived by his teachings.  All who knew her felt her love, kindness, generosity, empathy, and selflessness.

A graveside service was to be conducted at 3 p.m. Wednesday, Jan. 13 in Calvary Baptist Church Cemetery (Davie Academy Road), with the Rev. Terry Myers, Dr. Bobby Henderson and the Rev. Jack Barkley officiating.  The body will lie in state in the church from 1:30-2:30 p.m. and other times at Eaton Funeral Home. Pallbearers will be Nelson Dellinger, Kenneth Haneline, John Koontz, Jim Snider, Johnny Taylor and Henry Walker. Due to COVID-19 restrictions, the family requests those in attendance wear a mask and practice safe social distancing.