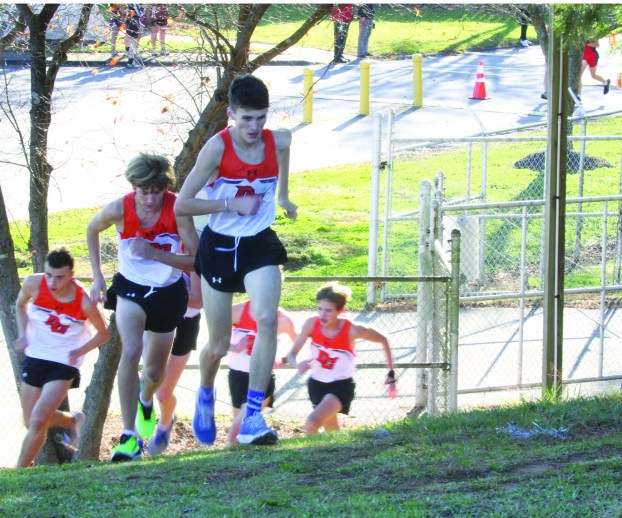 While the War Eagles finished near the bottom of the team standings, the Davie coaches were very pleased with the effort of their young squad.

“This meet was an elite meet with many of the top teams in the state being represented,” said coach Rob Raisbeck. “Six of the top 16 ranked teams in North Carolina were present, including Chapel Hill, Weddington, Cuthbertson, Mt. Tabor and North Lincoln.”

Andrew Brown led the way for the boys with a time of 17:02, a new PR by 24 seconds. Fellow junior Caleb Young was next in 17:15. He was closely followed by Nate Brooks in 17:20. Sophomores Owen Sulecki and Sebastien McEwen had exceptional races as they rounded out the Davie scoring. Sulecki’s time of 17:49 was a new PR by 36 seconds, while McEwen had an even more dramatic improvement. His time of 18:23 bettered his previous best effort by 43 seconds. Cole Swade finished in 18:52 while Sam Warner knocked a second off of his previous best time in 19:05.

“Andrew, Owen and Sebastien were really good today,” said Raisbeck. “Our average team time of 17:34 is the fastest Davie has run in the five years coach (Jeff) Jones and I have led the program. We had two goals today. The first was to run fast, which we did. The second was to beat Reynolds, which we have not done in the last five years and beyond. Even though their team average of 17:52 was considerably slower than us, they were so strong up front that they beat us point-wise. They put three seniors in front of our No. 1 and that was the difference. The last spot to get into regionals will come down to us and Reynolds at the CPC meet. Whoever comes out on top that day will advance.”

The Davie girls were shorthanded as they ran without No. 1 runner Riley Almond.

“Riley was ready to run really fast today, but she was a little under the weather so we held her out,” said Raisbeck. “She was really disappointed she didn’t get to run but I told her the only race that counts is Jan. 6 and she will be ready to go then.”

Almond’s absence meant that the rest of the Davie girls had to step up, and fortunately they were up to the challenge.

“I knew Lexi, Gracie and Presley were ready to run fast today,” said Raisbeck. “We could see it coming in workouts over the last month. It was really gratifying to see those smiling faces after the race.”

The team will continue training through the holidays in preparation for the CPC meet Jan. 6 at Kernersville’s Ivey Redmon Park. That meet will serve as a qualifying meet to advance to the 4-A Midwest Regional on Jan. 16. Traditionally, all 19 teams in the region would compete at regionals in hopes of advancing to the state meet. However, the NCHSAA has radically revamped the qualifying process this year due to Covid.

“The new qualifying process really penalizes us,” said Raisbeck. “Our region consists of the CPC, the Metro (Guilford County schools) and the Southwestern (Mecklenburg and Cabarrus) conferences. A total of eight teams will advance to regionals based on how they perform at the three conference meets. The Metro gets two teams, the CPC gets three and the Southwestern gets four bids simply because they have more schools. Currently our boys are ranked sixth in the region and the girls are fifth. But both squads are fourth in the CPC. Our girls and boys teams, for example, would probably each win the Metro Conference and easily advance to regionals. But since we are in the toughest conference, the girls face an impossible task and the boys are in a dogfight with Reynolds for the last spot. Similarly, our boys would battle East Meck for the second spot in the Southwestern Conference, which gets four bids. For the girls, two or three schools will come out of that conference that we would easily beat.”

Individuals not on qualifying teams also have an opportunity to advance to the regional meet. In the CPC, the top three individual boys and top two girls not on the three qualifying teams also advance – but must also be among the top 12 finishers at the conference meet. This is where the strength of the CPC also creates disadvantages as compared to the other conferences.

“Reagan, West and Reynolds will almost definitely be the top three girls teams at conference and advance to regionals,” said Raisbeck. “The problem is that Reagan and West are loaded with depth. Riley and Lexi are currently ranked 14th and 18th in the conference and will really have to race well to get into the top 12 and advance. If we were in the Metro, Riley would probably win the conference championship individually and I think our team would win as well. There should be a way to select at-large teams or individuals to make it to regionals due to inequities in the relative strengths of the conferences, but that didn’t happen. So we will just have to go out and beat people head-to-head Jan. 6.”

By Brian Pitts Enterprise Record The first four games for the Presbyterian men’s basketball team has served as validation that... read more