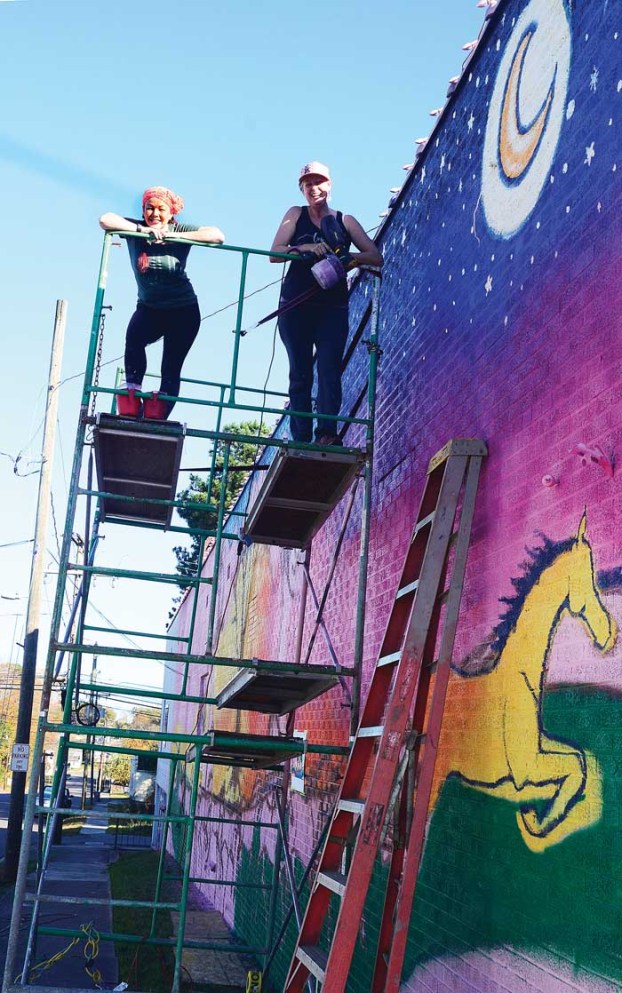 Cheryl Lipsteau and Madelyn Greco from atop the scaffolding on Depot Street in Mocksville. - Photo by Robin Snow

The horses are primed and ready to run up Depot Street in Mocksville again.

A mural being painted onto the side of the Martin & VanHoy Attorneys building on the square in downtown Mocksville is taking shape. It depicts a running of the horses from the early 1940s.

William Lester Richardson Sr. remembers. And he told the story of the wild horses to Jane McAllister on Sept. 1.

“They brought them in on the train and cowboys came with them from Montana. During the war years, say about ’43 or ’44 maybe on to ’45 because you couldn’t get gasoline to run tractors, and they didn’t have tractors you know, they didn’t make any, so they used horses on the farms. That’s the reason they brought them in here.

“They were wild. They would unload them at the depot, run them up Depot Street, across Main Street on the square, and down to where Junkers Mill is. To the right, daddy had a blacksmith shop there, had a corral there. First thing you had to do was shoe them. You had to break them to work on the farm.”

Richardson went on to talk about life as he knew it growing up and living in Mocksville and Davie County.

From past newspaper accounts, the running of the horses attracted quite the crowd to downtown just to watch.

But back to the mural.

Cheryl Ann Lipsteu was commissioned by the Mocksville Tourism Development Authority and Davie County Tourism to paint the mural, and is being assisted by Madelyn Greco. The two put their on twist onto the mural, approved by the town.

Lipsteu, who along with Greco, have seen business grind to almost a halt since the pandemic. Both are professional artists, specializing in body art, murals, portraits, illustrations and sculpture. Greco is a five-time world champion body painter.

Lipsteu said she gave multiple designs for the town to approve. “They wanted the oak trees and something creative and colorful. It’s got to be exactly as they approved.”

The horses are the color of the rainbow, representing the diversity of all of the people in the town. The oak trees are connected to earth goddesses, representing unity.

It’s been quite a task for the two women, as it’s the largest mural they’ve ever painted. They started cleaning and priming the first of the month, and hope to be finished, weather permitting, no later than early 2021.

“We are just going with the flow and it’s working out,” Lipsteu said.

Making matters more difficult is the terrain. The scaffolding is set up on a steep sidewalk, and the portion of the almost 1,200 square-foot wall at the bottom of the hill is impossible to reach to paint any detail. “Its very wobbly because the ground is uneven, so it’s been a challenge.”

Another challenge is painting up close, and still trying to see the big picture, making sure everything is to scale. To say the least, they walk across the street a lot to see the progress.

The two have worked together on several projects for years. Lipsteu lives in Winston-Salem, Greco in Reidsville.

“It’s been such a fun town,” Lipsteu said. “Everybody has been coming by with positive reactions to the mural.”

How long will it last?

2 more from Davie die with COVID

Davie County is trending with the rest of North Carolina with an increased number of lab-confirmed COVID positive residents. And... read more