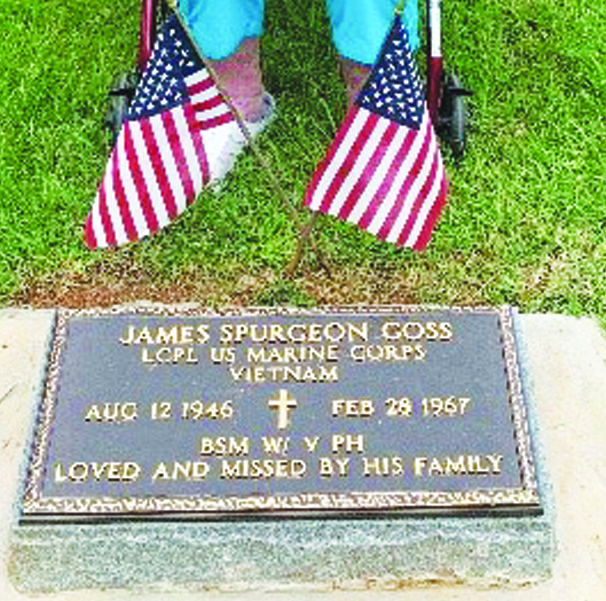 There is no doubt that LCPL James Spurgeon Goss was a hero.

He was a man of principle, who served our country honorably, with valor. On Feb. 28, 1967, he was killed on the battlefield in Vietnam.

Mr. Goss was laid to rest in the cemetery at Smith Grove Methodist Church, and was furnished a marker by the Department of Veterans Affairs.

Over the years, this marker has become a source of tension in the community. Some feel that he was slighted, as his Bronze Star Medal with Combat “V” was not listed on his grave marker. Others took issue with the way his unit was listed.

“It is understandable that members of our community would like the marker of Spurgeon Goss to reflect his accomplishments, especially since he gave his life for our freedom. However, many people do not realize how a grave marker is issued and how strict the rules are when it comes to getting something corrected,” said Megan Tomlin, Davie Veterans Service Officer.

When the VA issues a marker, it is at the request of the family member. At the time of Goss’s death, his next of kin more likely than not sat down with a casualty officer and went through the process of properly honoring his legacy. At this time, his Bronze Star Medal with Combat “V” may not have been awarded yet, as records show that he received that honor posthumously.

While it cannot be verified who chose what was written on the marker placed in 1967, nor the reasons why, it is certain that the marker was placed on his grave with great deference and love, she said.

“Every time someone brought up Spurgeon’s marker, they unknowingly ripped open a scab, and his family was left to silently deal with all of the emotions and pain that came with reliving his sacrifice,” Tomlin said.

As the family continued to work with the Davie County Veterans Service office, trying multiple times to have the marker corrected by the VA, a different approach was tried – to raise the funds needed to purchase a new marker from a private company.

Working with Spurgeon’s sister, Tomlin reached out to the Davie County Hero’s Fund, created by donations from the community to help veterans receive emergency financial aid, usually for such things as home repairs, vehicle repairs, or other emergency relief.  Veterans who are in need apply through the Davie County Veterans Office.  Tomlin verifies veteran status and then turns over the application to the committee members for a decision.

Although this was not an eligible project for the Hero’s Fund because it was not an emergency need, the request did spark the interest of other donors and, after years of work, the family was finally able to get his marker replaced.

Attorney Grady McClamrock Jr. and Lambert Funeral Home each paid for one half of the marker.

“A lot of thought went in to what should be placed on his marker. The family looked at examples of markers in other cemeteries and reached out to different places to see what the current standard is for someone in Spurgeon’s position.

“Be assured that the newly placed marker was at the sole request of Spurgeon’s eligible family member, his sister. This marker is not intended to be used as a research piece in the years to come. Rather, Spurgeon’s marker is a memorial for his remaining family who love and miss him every single day. It stands as a reminder to be kind, because you never know what someone is going through.

“Putting others before self, that is the spirit of Spurgeon Goss,” Tomlin said.

If you would like to continue to honor the memory of Spurgeon Goss, yconsider a donation to the Spurgeon Goss Scholarship Fund. Also contact the Community Foundation for more information.

For assistance in applying for veterans benefits, contact Tomlin at 336-753-6225.